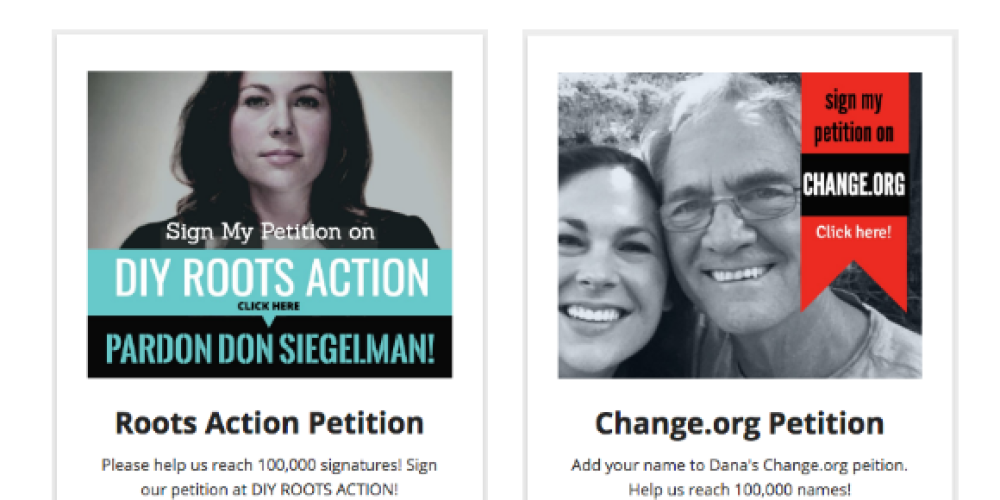 Alabama station CBS 42 WIAT broadcast the announcement last week that Dana Siegelman has launched a new petition appealing to the White House on behalf of her Dad. This new petition, which can be found at DIY ROOTS ACTION provides an alternative to, and is in addition to, the Change.org petition which has almost 64,000 signatures. If you have not signed one of the petitions yet, please sign the new petition today. If you have already signed one of the petitions please ask your sympathetic friends and family to sign right away. We still need more than 36,000 signatures to get the attention of the White House! Help us reach our goal of 100,000 signatures!

Friends of Siegelman have made a number of appeals to the White House. These appeals include successful “Call the White House” campaigns and hand delivered letters* asking that Don Siegelman be released from prison and have his innocence and good name restored.

Citizen journalists all over the web post stories on their blog, share on Facebook, and tweet on behalf of Governor Siegelman in unprecedented numbers! Despite all this, Former Governor Siegelman still resides in Oakdale, LA. in a federal prison serving out a six and a half year sentence in prison resulting from a trumped up conviction on federal corruption charges. Our hope is that 100,000 signatures on the Change.org petition and the Roots Action petition combined will move the White House to act! Sign the petition of your choice, and learn more on the Don Siegelman website.

We believe Don Siegelman is a political prisoner. Many legal scholars and former Attorneys General across the country have signed letters agreeing that his prosecution was political and an affront to American ideals of democracy and justice.