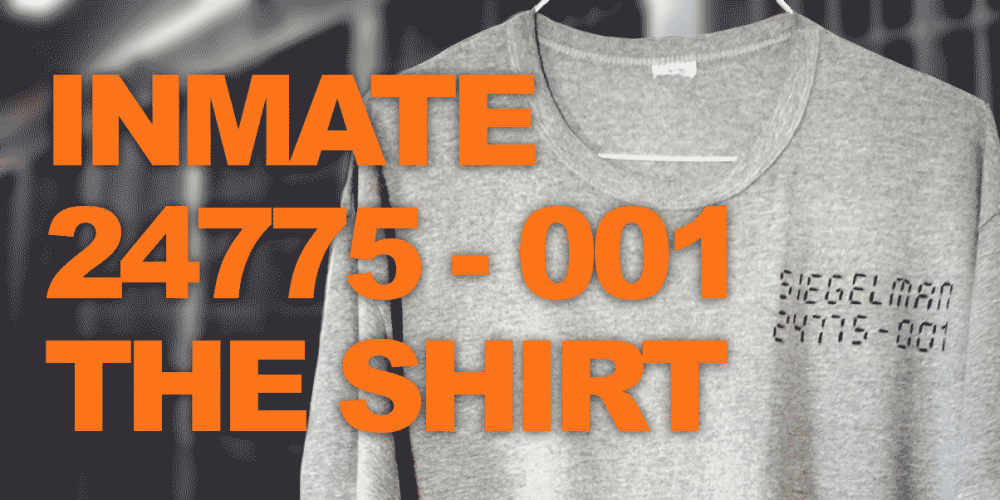 Governor Siegelman is SELLING THE SHIRT OFF HIS BACK!

Imprisoned Governor Siegelman is selling the shirt off his back to raise money for Steve Wimberly’s documentary, Atticus v. the Architect. The shirt is being auctioned on EBay.

How many people do you know have an authentic prison T-shirt worn by a “America’s #1 Political Prisoner”?

Governor Siegelman was sentenced to 88 months in 2007 and has worn this T-shirt as he walked countless laps around the prison asphalt track thinking how he could help prevent this from happening to others.

He has worn this shirt through hard times, when his lawyers told him “No, your appeal will not be heard by the Supreme Court.” He had this shirt on when he was thrown into solitary confinement because he gave a radio interview in support of criminal justice reform.

T-shirts are not prison issue, they are available for purchase from the prison commissary. T-shirts are only allowed to be worn at certain times, during exercise and personal time after 4pm when work is done for the day. The prison T-shirt is one of the few things that a prisoner can really own in prison, one of the only pieces of clothing that does not belong to the government. They are made by fellow prisoners who work hard for $0.23 cents an hour.

This particular T-shirt has traveled across the country, has been processed, sewn and stenciled by other prisoners who toil around the clock to earn enough money to buy what is needed at their own commissary, and send the rest home to their family.

Once the T-shirt was made, it was shipped to the Oakdale Federal Corrections Complex, where it arrived at the prison warehouse, also run by prisoners. From the warehouse the shirt made it’s way to the Oakdale commissary, where Governor Siegelman stood in line waiting, waiting and waiting to purchase it. The stenciling does not come with the shirt – that is something that has to be done for you, as a favor from another inmate – for vanity, partly, and because no one can steal your shirt.

While Governor Siegelman is out of legal appeals, he still has one option… US!

There is a documentary being developed by Steve Wimberly called “Atticus v. The Architect” and it MUST get the attention of President Obama.

To help with this effort, Governor Siegelman is literally “SELLING THE SHIRT OFF HIS BACK”. We will auction off his only piece of property…his worn, gray prison T-shirt.

The T-Shirt is available to bid on EBay.