Don’s story is one of a local Alabama boy gifted with great political talent. This political success was his only crime, and the one that landed an innocent man in prison. From his earliest years he demonstrated leadership, and the people of Alabama loved him no matter their party affiliation. They elected him to every major office in the state. Eventually he ran for the highest office in Alabama and he won the Governor’s office in a landslide.

Don Siegelman, the 51st governor of Alabama, was born in Mobile, Alabama in 1946. Siegelman, who is the only person in Alabama who was elected and served in all four major office—Secretary of State (two terms), Attorney General, Lieutenant Governor, and Governor. 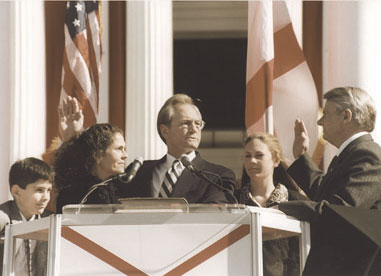 The second son of a hard working middle-class family, Don’s values and beliefs were forged by the fire of experience. His mother was a beautician who worked into her 70s and his father worked at a Mobile music company, until he was fired after having several heart attacks.

From his parents, Don learned a work ethic that served him well in his political life. He accomplished more to move Alabama forward in one term as governor than any elected official since the populist governor Jim Folsom.

Another lesson Don learned from his parents, Catherine Andrea (nee Schottgen) and Leslie Bouchet Siegelman Sr., was to value the principles of fair pay for hard work and the rights of workers to expect fair treatment. The lessons of the music store were never forgotten. His father’s long years of hard work ended in sorrow at being fired and shame at being striped of his ability to care for his family—not because he was a bad employee but because he got sick. This motivated Don to campaign for the rights to fair treatment for workers. And he realized early on that educated workers could command a better salary and better treatment. Education and a focused search for good jobs for Alabamians became one of the support pillars in his political platform.

And the voters approved. Don won the Alabama gubernatorial with 57 percent of the vote—an amazing feat for a Democrat in blood-red Alabama.

Public service was Siegelman’s calling, and he heard it even as a teenager. He ran for, and won, numerous leadership positions at Murphy High School in Mobile. At the University of Alabama, he was National Interfraternity Council representative, Senator from Arts and Sciences, and President of the SGA.

He earned his law degree in 1972 from Georgetown University Law Center, working his way through the prestigious law school as a member of the Capitol Police. He studied International Law at the University of Oxford from 1972-73. Hard work was the ethic Don learned at home, but he was also blessed with intelligence and leadership abilities. 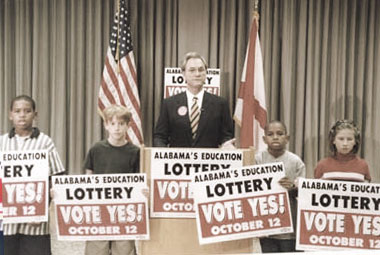 Siegelman was the first state official to testify against the hazardous waste industry’s attempt to get a permit to burn hazardous wastes in the Gulf of Mexico. He also called for an investigation into the Emelle Landfill—one of the largest hazardous waste landfills in the world.

Under his purview, the Secretary of State’s office operated in the black and even returned more money to the general fund than it spent.

He was instrumental in writing laws to increase the hours of voting precincts, improving accessibility for the elderly and handicapped, and established training programs for election officials. His goal was to make sure working Alabamians had a fair chance to cast their ballots.

As early as his service as Secretary of State, Don’s ideals and political attitude became clear. Because he could pull support from all Alabama voters, he was going to be a problem for those with another agenda.

Don ran for and won the office of Attorney General where he fought to make Alabamians safer. He was the 43rd Alabama Attorney General from 1987-1991. As AG, Siegelman fought harder against toxic waste disposal in Alabama. His state was in danger of becoming the dumping ground for hazardous waste from across the entire nation.

He also passed a law that made rape of a spouse a crime. Alabama was the only state without a law protecting women. Under the legislation Don crafted and pushed through, a woman can charge her husband with rape.

Laws he championed also gave law enforcement the right to confiscate everything from airstrips to cash to farmland for those convicted of drug trafficking.

As Lieutenant Governor under Fob James (1995-1999), Siegelman continued to support what would become the focus of his governorship and public service—education, voting rights, justice, and law enforcement. He managed to bring both houses of the fractious Alabama Legislature to the table to pass laws that improved life for the average Alabamian.

He brought in good paying jobs. He recruited the Hyundai plant, a second Mercedes plant, and he signed deals bringing Honda, Toyota and many auto suppliers to Alabama. He created jobs by rebuilding over 1,000 of Alabama’s schools and removing 3,000 portable classrooms, and initiating the largest road and bridge construction in Alabama’s history. Governor Siegelman created tens of thousands of good paying jobs.

When Siegelman took over the reins as governor in 1999, he’d pushed hard for a state lottery for education and promised to give the voters a say in the matter. His dream was to use money from lotto tickets—money which has for decades gone to Florida and other neighboring states with state-run lotteries—for free college education. The lottery proceeds would fund free tuition at state universities for Alabama high school graduates. There would also be funds to support early education.

A referendum ballot in 1999 led to the defeat of the lottery idea. When the lottery money wasn’t available to promote education, Don created the Alabama Reading Initiative, a program that was emulated in other states.

By 2000, Alabama was feeling the economic downturn harder than many other states. Manufacturing jobs had fled America to countries where labor laws weren’t enforced. Unregulated mortgages had put many people into homes they couldn’t afford.  The general budget couldn’t stretch to provide the necessary state services to all the people. Opponents to tax increases didn’t care that Alabama citizens would be short-changed.

In an effort to raise the living standards for Alabamians, Siegelman went after auto-manufacturing jobs. He succeeded in seeing the Mercedes plant double in size. He visited foreign countries and brought back investments in Alabama–Toyota, Honda, and Hyundai saw the potential and built major assembly plants in Alabama.

As governor, he also followed up on environmental concerns. He preserved the vast, wild acreage of the Mobile-Tensaw River Delta, protecting approximately 260,000 acres in the second largest river delta in the nation.

Loss of Re-election to Governor

After it was announced by The Kiplinger Letter, March 28th, 2001, that Governor Siegelman might be a formidable candidate for President in 2004, a joint investigation was started by his Karl Rove related political enemies, the state attorney general, Bill Pryor and Leura Canary, the newly appointed U.S. Attorney whose husband was running Governor Siegelman’s opponent’s campaign.
Siegelman’s popularity in a state the Republicans considered their own was a cause for serious concern. His ascending star had to be stopped.

In a re-election bid for governor in 2002, Siegelman was defeated in a case that many believe involved voter fraud. Baldwin County votes were counted. Siegelman was declared the winner by AP. More votes were “discovered,” and Bob Riley was given the election by 3000 votes from one county.

Seventy-five former attorney generals ask Holder to investigate the prosecution of Don Siegelman because of “gravely troublesome facts” about his prosecution that raise questions about the fairness and due process of the trial. 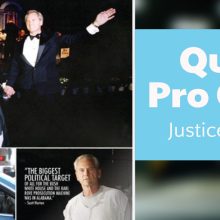 Don Siegelman Writes in this Popular FB post: Three years ago, February 8, 2017, I returned home from federal prison. And I’m so glad to be back! I had spent five years some 500 miles away from my family. I was sent to prison under the theory that I, as governor in 1999, had swapped […] 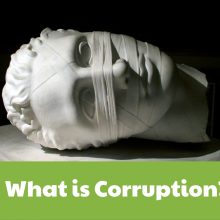 JOHN FARMER JR., writing for The Hill last week, notes the word, corruption, is surfacing a lot lately. However, conflicting uses of the term begs the question “what is the definition of corruption, exactly?” We are blogging about his article since he mentions the Don Siegelman Case as an example of the contrary application of […] 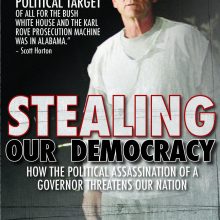 Don Siegelman’s Book “Stealing Our Democracy,” is set for release in June

Legal Schnauzer posts a summary of Don Siegelman’s disturbing new biography which “promises an inside look at perhaps the most notorious political prosecution in U.S. history.”  The Schnauzer writes: In a searing political memoir, former Alabama Governor Don Siegelman explodes the myth of an impartial U.S. justice system. He should know. Arguably the most successful […] 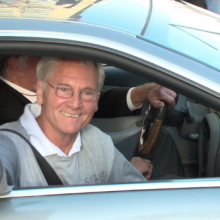 “It will be a raw and wonderful reunion” Dana Siegelman, the “Gov’s” daughter stated to WRGX as she waited for her dad to arrive in the Birmingham-Shuttlesworth Airport. Dana is an ardent supporter of her dad’s innocence, appearing on major networks’ talk shows and sponsoring petitions defending her Dad’s integrity. She had been waiting for this day […] 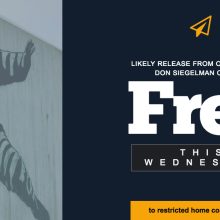 Early release! As soon as this Wednesday!

Word on the street is that Don Siegelman will be released from Oakdale Prison Camp on the earliest possible release date, February 8, 2017.

A Final Plea to the President

President Obama, set an innocent man free! One Last Blow against Injustice! To our most honorable President, You have one week left in the White House,  a time of fond memories and farewells. Before you go, however, you could strike just one more blow against injustice.  The former Alabama Governor, Don Siegelman, was the victim […]