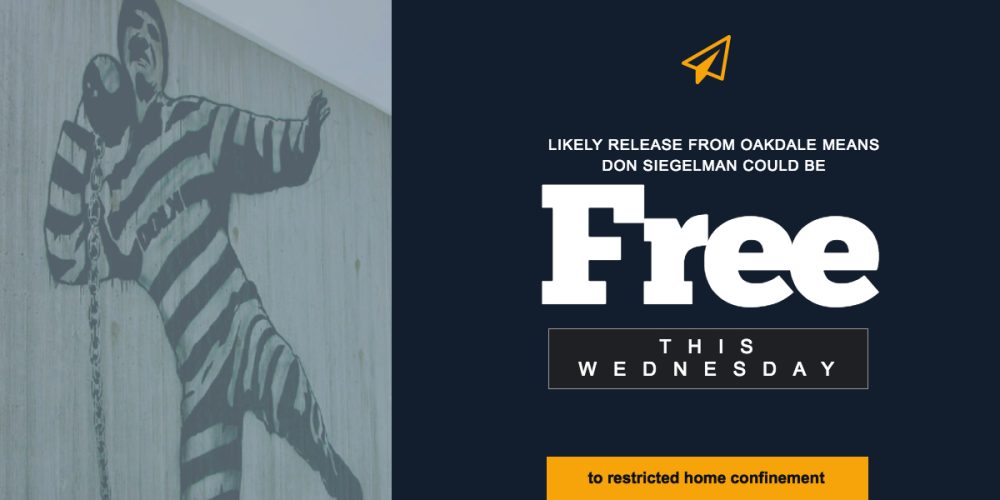 Word on the street is that Don Siegelman will be released from Oakdale Federal Prison on the earliest possible release date, February 8, 2017.  This rumor was supported by an article by Zach Tyler for the Anniston Star (paywall to article) saying that Don could be leaving the federal prison where he has been housed (on and off) since he was sentenced in 2007. WSFA News reported, quoting former Siegelman aide, Chip Hill, that Don Siegelman was told by prison authorities he would be released this Wednesday. Posts on the Siegelman Facebook site have been abuzz with hope, plans and speculation.

We began counting down to the earliest possible date for release in our blog posts and emails last Fall, hoping that last Thanksgiving and Christmas were the last holidays Don would spend inside Federal Prison Camp Oakdale. We have suffered so many disappointments concerning Don’s prosecutions and appeals that we were reserved in our expectations, but pleased that this time the best possible outcome may be about to materialize.

Still stinging from the disappointing news that the President would not exonerate or pardon Siegelman, his friends and supporters have been cautiously optimistic. Hard realities have tempered the exuberance of the Siegelman supporters in that the BOP, which has control over Don’s release can be heavy handed, sometimes whimsical. Last year, a prison staff approved radio interview landed Don in solitary for many weeks, so Friends of Siegelman are keeping their fingers crossed that there will be no slip ups to impede Don’s discharge from Oakdale.

On the Day of Don’s Release from Federal Prison

Les Siegelman, Don’s brother, disclosed by phone that he hopes that Don will wake up Wednesday morning,  process out of Oakdale, board the transport to Birmingham and arrive sometime the afternoon of the 8th. He expects he will have to go straight to his probation officer to report when he arrives in Birmingham, leaving him little or no time to greet supporters who might want to welcome him home. The supervising probation officer will instruct Don about the rules and regulations of his confinement, which could include not talking to the media. His first hours after processing will be spent with his closest family members.

The home confinement (could be six months) period will be strictly supervised, with Don wearing an ankle bracelet. Later he will be on supervised probation – possibly till 2020.

All media enquiries should be directed to Chip Hill:

Many people have expressed an interest in coming to Birmingham Wednesday to wave a ‘Welcome Home’ to him. If you are interested in gathering with others to welcome him, please private message the public figure page of Free Don Siegelman’s Facebook page. From there we will coordinate with you to make sure we can all come together to show Gov. Siegelman the love and support that awaits him!