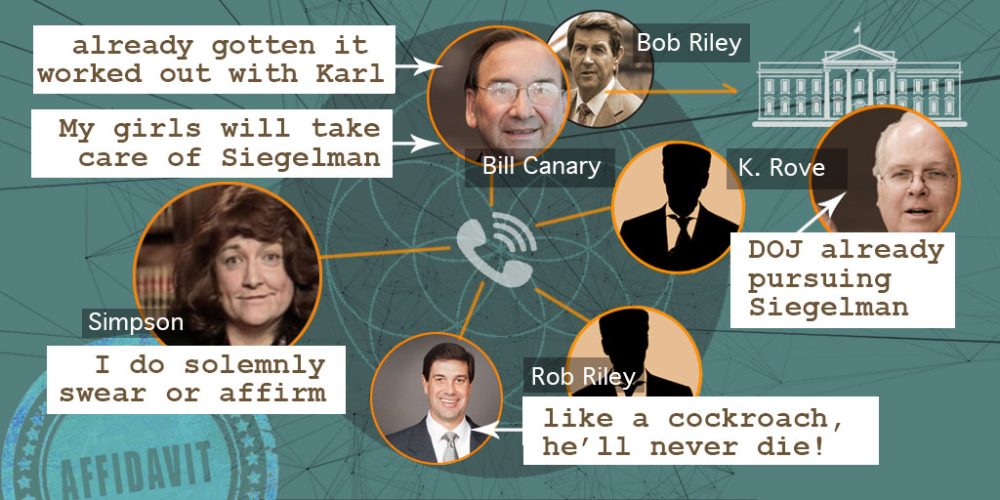 Today, with 103 days to Don’s earliest release date, we will remember the Jill Simpson Affidavit that rocked the nation and started a media fire. We will time travel through the eyes of the media to one of the most explosive days in the Siegelman Case: June 1st, 2007.

The Explosive Affidavit that spawned a Media Storm

When Alabama lawyer, Jill Simpson’s, explosive affidavit went public, it riveted the nation’s attention on Alabama. Siegelman defenders believed Siegelman’s prosecution was tied to the Attorneys General Scandal, and thus Karl Rove, but had no solid evidence to support the claim. This affidavit hit the newsstands with a sworn statement that exposed the man behind the curtain. 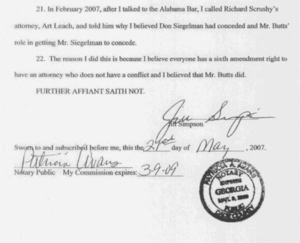 Signature on affidavit given by Jill Simpson

The New York Times had quoted the affidavit concerning the Siegelman Case in its morning edition. Once it secured the actual document, it declared that the full affidavit was “far more explosive than first indicated.”

Why? Because it points right to the White House. Further, it points to the guy in the White House who called the shots in the Federal prosecution of the Alabama Governor.  Specifically, It pulls the curtain back on the shots director – Karl Rove.

The affidavit was sworn by Jill Simpson, a lifelong republican who practices law in Alabama. She stated in her affidavit that she heard Bill Canary, a key republican political operative, say that Rove  told him “not to worry — that he had already gotten it worked out with Karl and Karl had spoken with the Department of Justice and the Department of Justice was already pursuing Don Siegelman.”

According to Simpson, Rob Riley said, “Siegelman’s just like a cockroach, he’ll never die. . . .”  Ms. Simpson said Bill Canary, an advisor to Governor Riley, assured the son, Rob Riley, not to worry, “his girls would take care of” Mr. Siegelman.”  “His girls” were his wife, Leura Canary, the U.S. Attorney for the Middle District of Alabama, and Alice Martin, the U.S. Attorney for the Northern District of Alabama. And yes, in fact, both of “his girls” brought convictions against Siegelman in their districts.

Harpers Online 07.07.07
Cracks in the Dam in the Siegelman Case
by Scott Horton

The Nation 10.24.07
A Whistleblowers Tale
by Glynn Wilson

The draconian sentencing that shocked the nation

In the background, the sentencing loomed. The prosecutor in Don’s case, Steven Feaga, had prosecuted Alabama Governor Hunt a few years earlier. Governor Hunt had actually pocketed $200,000, the strict definition of bribe. Feaga asked for community service for Hunt. Because of that, Don thought that he would be sentenced to community service since he had not personally benefited from the so called “bribe.” Stay tuned to learn of the contrasting treatment between the 2 Governors.