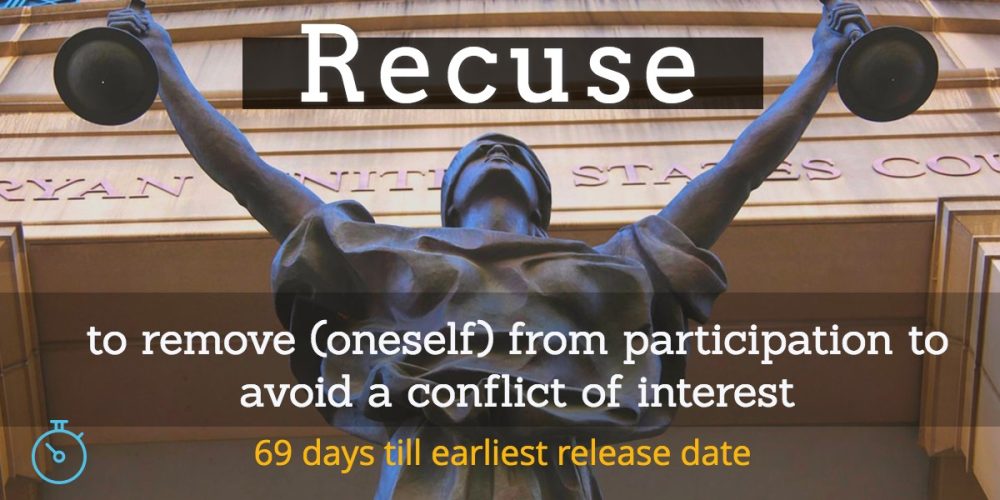 Was Leura Canary Lying about her Recusal? Where are the papers?

It has been been 14 years since Leura Canary held a press conference stating that “out of an abundance of caution” she had decided to recuse herself from the Don Siegelman Prosecution.

But the Siegelman/Scrushy team have never been able to uncover any recusal papers whatsoever in these many years. These procedures and its documentation are supposed to be public domain.

All FOIA requests concerning these documents have been utterly ignored or sidelined.

What is the DoJ hiding?

The Department of Justice played a cat and mouse game with the Siegelman Defense team. In response to FOIA requests, first the DoJ said there were no documents.

Then they said that there were over 500 documents but that a 2 page summary would be all that they would be given.

A Siegelman attorney appealed again in 2007, and almost two years went by before the DOJ released 187 pages of . . newspaper clippings! And nothing else.

If there are 500 pages of deliberation about the Canary recusal, you have to wonder why. “I know why it took 514 pages. It’s because it was not a routine decision,” Siegelman lawyer, Vince Kilborn understated. When asked about the insult of receiving the newspaper clippings instead of the documentation requested, Kilborn said “How stupid does the government think we are to be satisfied with a . . . press release?”

Scott Horton summarizes. “The bottom line? It seems the DOJ can’t keep its stories, or its numbers, straight while unlawfully withholding documents that Siegelman. . . and the public are entitled to see.”

Why is Leura Canary’s Recusal Problematic?

Let’s throw back to the Spring of 2002 when Leura Canary notoriously announces to the press that she is recusing herself from the Siegelman prosecution.

She states in a very public press conference that since she has no real conflict of interest in the case, she does not really need to recuse herself. However, she goes on to claim that despite the material lack of conflict, “out of an abundance of caution” she will step aside and give the case to her employee, Louis V. Franklin.

Let’s look at the statement that Canary made to the press about her wholly undocumented recusal. It was outrageously upside down. The appearance of a conflict of interest is the primary reason that an attorney decides to recuse herself from a case, not a gracious afterthought. More significantly, her conflict of interest was not harmless, but remarkable and material. Her self interest was primarily using her public office to protect and enable the political & financial interests of her GOP superstar husband. To the point, her husband was representing Governor Don Siegelman’s political opposition for Governor.

The ancient and corrupt principal at work here is that a public prosecution of your political rival is the best campaign promotion ever. Not only is it taxpayer funded, the media coverage is free!

So Leura Canary should have been off the case, and we thought that surely she was.

Then no one could find her recusal papers.

Where are the Recusal Documents, Anyway?

On top of the outrageous claim of no real “conflict of interest” the standard recusal documentation that Canary was required to submit to officially step down from the case cannot be found. Anywhere. Until this day.

So did Leura Canary actually recuse herself? There’s good reason to believe she stayed intimately involved in the Don Siegelman Case despite the charade of the undocumented recusal. (More, much more on that later.)

Winter 2002, David Cromwell Johnson, an attorney for Siegelman, filed paperwork with the Justice Department asking for her recusal.

Spring 2002
Press Statement by Leura Canary: “As to any matters pertaining to any current investigation of [Governor Siegelman] which may be underway, the Department of Justice has advised me that no actual conflicts of interest exist. However, out of an abundance of caution, I have requested that I be recused to avoid any question about my impartiality.”

Winter 2006
What deliberations by the DoJ did her ‘recusal’ entail? Attorney John Aaron wanted to know the answer to that question. He filed a Freedom of Information Act request with the Department of Justice on February 6, 2006. He asked for all the conventional papers usually prepared in connection with a recusal.

Summer 2006
DoJ finally replies to request saying first that there were no documents “responsive” to the request. Then that statement was revised to say there were over 500 documents “responsive” to the request, but that no documents would be provided.Instead they offered a 2 page summary of the documents. The reason given was that Leura Canary desired confidentiality. Apparently, the DoJ wanted to keep the contents of the documents secret.

The House Judiciary Committee next requests documents concerning 3 U.S. Attorneys, including Leura Canary. The other 2 U.S. Attorneys comply in full with the requests. Leura Canary responds by refusing to comply. What is she hiding?

2007-2009
Aaron again appealed in 2007, and almost two years went by before the DOJ released 187 pages of newspaper clippings–and nothing else.

Another Siegelman attorney, Vince Kilborn speculated as to why it would have taken 516 pages of documents to come to the decision that Canary should recuse herself. “I know why it took 514 pages. It’s because it was not a routine decision,” Kilborn said. Reacting to the DoJ’s submission of newspaper clippings instead of the requested documents, Kilborn asked “How stupid does the government think we are to be satisfied with a five-year-old press release?”

2009 May
Exasperated, John Aaron filed a lawsuit seeking the FOIA documents. During the course of the lawsuit, Aaron learned that more than 1,000 documents exist that are responsive to his request–and they were not disclosed until the lawsuit was filed. This is against the law.

Other FOIA requests denied in the Siegelman Case

2008 Conyers went the Department of Public Integrity to explore allegations of “selective politically motivated prosecutions” of Governor Don Siegelman in Alabama. They gave him a Cliff Notes summary of the case but did not give him the full report of its investigation, which has never been made public.

To date, none of these requests has been honored.

William Canary was a long time pal of Karl Rove. It is said that Rove helped him get 2 powerful positions with the RNC working under both HW Bush and G Bush. In ’94 it was Bill Canary who invited Rove to come to Alabama to commandeer the Alabama Supreme Court for the Republicans.

1995 article, Time Magazine’s Michael Kramer called Bill Canary a “legend in Republican circles” and in the same article, former RNC Chairman Rich Bond described Bill Canary as an “expert political paratrooper” and “someone you dropped into a state where something needed fixing and it got fixed.” In this case, that something that needed to be “fixed” was the successful political career of Don Siegleman.

Mr. Canary was the architect of a special relationship between the Alabama G.O.P. and the Business Council of Alabama that provided the financal pipeline for many Alabama G.O.P. election campaigns. He was widely described as the G.O.P.’s Alabama “kingpin.”

The Harper’s Blog 09.14.07
The Remarkable ‘Recusal’ of Leura Canary
by Scott Horton

Conyers [head of Judiciary Committee] cites one e-mail in which Canary forwarded prosecutors a letter from Siegelman to his supporters.

“Ya’ll need to read because he refers to a ‘survey’ which allegedly shows that 67 percent of Alabamians believe the investigation of him to be politically motivated,” she wrote. “Perhaps grounds not to let him discuss court activities in the media?”

The whistleblower, a legal aide in Canary’s office named Tamarah Grimes, also is quoted as saying Canary “kept up with every detail of the case.”

Legal Schnauzer 01.13.15
Oral arguments in Siegelman case might be overshadowed by reports about magistrate’s deceit
by Roger Schuler