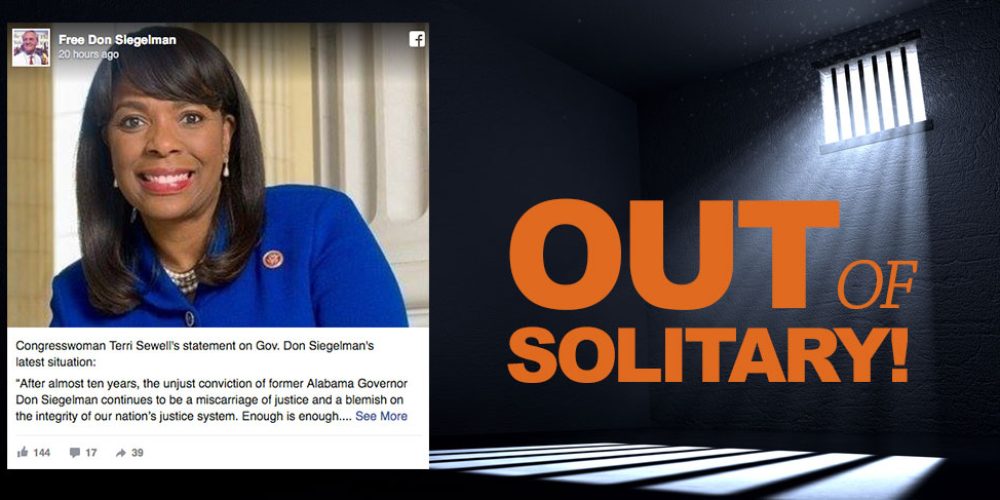 Alabama Congresswoman Terri Sewell recently released a public statement in response to Siegelman’s Solitary Confinement again. She stated “After almost ten years, the unjust conviction of former Alabama Governor Don Siegelman continues to be a miscarriage of justice and a blemish on the integrity of our nation’s justice system. Enough is enough.”

Don was placed in solitary last week. He was put in solitary, coincidentally, around 4 hours after the Washington Post published an article by Robert Barnes. The offending article included an interview with Don. The interview did not surprise the prison, because the interview was prison approved!

Then Post ran a story about Don’s visit to solitary and, again coincidentally, he was released the next day.

Egregious and Arbitrary or Coincidental?

Long-time friend and former Siegelman aide, Chip Hill, stated this week, “The treatment Don is receiving is not fair and certainly does not appear to follow any standard procedure or protocol. It is egregious and arbitrary. This latest situation is just the latest instance of coincidental timing in Don’s case.

“It joins the timing of the indictment in the middle of a campaign. A trial date set weeks before the Primary election. The Government resting their case merely days after the Primary.

“It is an insult to the intelligence of justice-loving people everywhere to believe that this many examples of improper and illegal activities could merely be coincidental. 113 former Attorneys General believe Don Siegelman has been wrongfully convicted, as do the nation’s foremost legal experts, and many members of the national media, including many Republican and conservative commentators.

“But, I’m sure that’s just another coincidence.”

“Our ultimate goal remains the early release and subsequent pardon of Mr. Siegelman so he can return to his family and once again contribute to the State of Alabama.”