CBS 60 MINUTES: Did Ex-Alabama Governor get a raw deal?

The 60Minutes feature, Did Ex-Alabama Governor get a raw deal?, first ran on February 24, 2008, on Don Siegelman's birthday, which he watched from Federal Prison in Louisiana.

You may view the piece in high quality streaming video from the CBS site by paying a nominal subscription fee. Out of respect for CBS and the work that they did on this piece, and to have access to the 60Minutes episodes at the CBS website, please consider subscribing. You may read the transcript at the CBS site for free.

Below is a 2-part YouTube rendition of the CBS 60Minutes piece on Don Siegelman where you can view the 9 minute piece, gratis, here on this site.

The Evolution of the Siegelman Saga in Television, Video and Film

Video Chronicles began with local news coverage of the prosecution and the trial, wound its way to a few popular national mainstream television specials, and then fell to the independent and alternative journalist to keep the torch burning. It started as a propaganda effort by local press to unseat a popular democrat in Alabama, but whistleblower’s reports and the irregular court proceedings woke up the concerns of national media.

At the beginning of the Siegelman prosecution, there was little national video concerning the case. The story showed up primarily on local television during his trial: it was primarily an Alabama story. 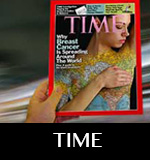 The shocking revelation of Karl Rove’s involvement in the Siegelman Prosecution riveted the attention of the whole country. A Republican lawyer and opposition research operative in Alabama, Jill Simpson, gave sworn testimony that Karl Rove was influencing the Siegelman prosecution from the White House. Karl Rove had long had a reputation for using the Justice Department for political purposes. This story was sworn testimony to support those claims. It first surfaced online with a CNN/Time story and in a cover story in Time Magazine.

The Don Siegelman story would occasionally surface on a very popular prime time show. One such show was Countdown with Keith Olbermann on May 12, 2008. On the linked episode here the Siegelman Gate was # 3 in the Olbermann Countdown. 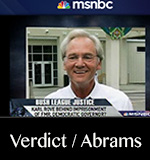 Siegelman Case featured in 5 of his Bush League Justice episodes

In December of 2007 an investigative series on Dan Abrams’ MSNBC show, The Verdict, called Bush League Justice, featured the Siegelman Case. In that series we watched Karl Rove defy subpoena after subpoena, refusing to testify before congress about his involvement in the Siegelman prosecution. Eventually he worked out a sweet deal where he submitted written responses to written questions from the investigative committee. He answered the questions in writing with the aid of his lawyers. It is reported that his response was a masterpiece of “non-denial denial” by those who read it. Karl Rove’s attempt to wriggle out of giving a sworn statement under oath, to undergoing an investigation or questioning under oath gave significant weight to the accusations of the Siegelman camp. Bush League Justice 2.28.08.

CBS produced a breakout investigative piece on 60 Minutes. This show, which ran on February 24, 2008, exposed the Siegelman Case to a national audience. They told a wickedly complex story with elegant style and clarity. You may link to the CBS video (paywall) to see the episode in high resolution or you may view the show on YouTube below.

Since then a number of fine interviews and episodes have been broadcast and uploaded to online video accounts. Stay tuned as we bring you these video and film pieces in the future.

Currently, there is a documentary in production by Steve Wimberly called Atticus v. The Architect.  Stay tuned for the release of this film! The producer claims that the documentary will make the Watergate political scandal look like child’s play!