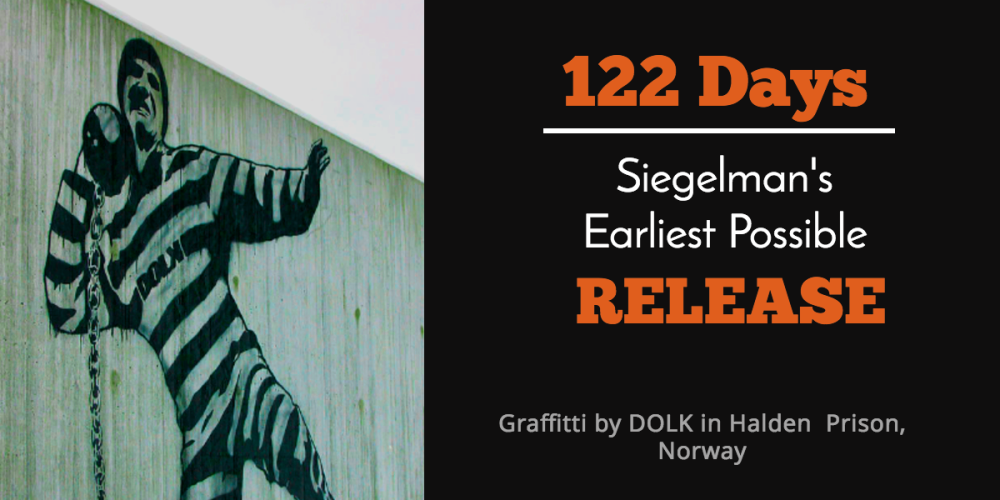 Through the Early Release Program, former Governor Siegelman might be “breaking out” of Oakdale Federal Prison Camp in four months to the day, February 8, 2017. From Early Release he will graduate to House Arrest in Birmingham. Then a probation of 3 years, ending 8.17.2020, will follow. Of course, the BOP has discretion in this matter, and the earliest release date may not be the actual release date. We can hope, nevertheless, that we will have The Gov back in Alabama early next year.

He wrote of his reservations about House Arrest in an email to his friends via Corrlinks, the prison email.

“Having been locked up for several years, being sequestered among inmates has an impact whether one wants to admit it or not. Here are some of the issues I am expecting to face on House Arrest/Home Confinement. . . .

“Some inmates turn down Home Confinement or a Halfway House. Maybe you can see why after reading this.

“Being around, close to, shaving, showering, sleeping, eating with a wide variety of male only humanity for several years straight has an impact. I have written about . . . the nick names, the lack of educational opportunities and the impact it has on inmates. I have written about the kinds of jobs, the pay, the scarcity of good food, the absence of loved ones to hold, hug or talk to. . . . The absence of news of what’s happening to those one cares about and limits of knowing what’s really happening in the free world. The price of a cup of coffee or the cost of a tasty meal.

“For me, not having a job, any income, or retirement benefits…I have no health insurance, no car, or a way to pay for one, or the insurance on one….a cell phone and laptop that’s five years stagnant…everyday things that I will somehow have to cope with concerns me.”

We Friends of Siegelman have our regrets and concerns as well, because we failed to get the Supreme Court to overturn Don’s conviction. Furthermore, the President has yet to exonerate Don.

Despite the fact that we raised quite a ruckus, we failed. Even though we wrote letters to Congress, called the White House, and gathered signatures on petitions we fell short. An unprecedented number of former Attorneys General wrote an amicus brief for Don’s case. Journalists wrote in papers from the NYT to the LA Times. Producers featured the case on mainstream and alternative tv and radio. Bloggers blogged. Authors featured the case in their books on Politics. We even got under Karl Rove’s skin, because he dedicated 8 pages to Don Siegelman in his autobiography!

We did not succeed even though we raised our voices online, in social media, on audio and video – to little avail. Experts in Judicial Ethics condemned Don’s treatment. Whistleblowers exposed irregularities. Journalists and supporters were physically and mentally harassed for telling the truth. And yet we have not got the justice and exoneration that we seek!

We have our concerns too, Gov, but we look forward to your Early Release! We eagerly await the day you will breath Alabama air again, even if you can’t leave the house. It’s been a long and painful ride, Gov. Let’s make it mean something.