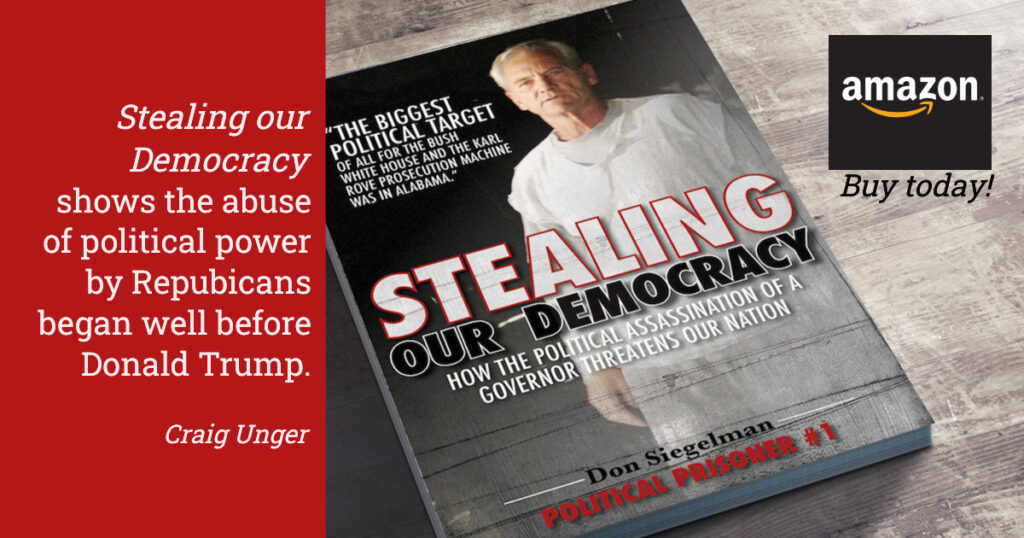 Praise for Stealing Our Democracy:

How the Political Assassination of a Governor threatens Our Nation

“Stealing Our Democracy is every bit as compelling as Kafka’s The Trial. The governor’s book reveals how the Department of Justice, used as a political weapon, is threatening America’s democracy. Siegelman’s story is astonishing, compelling, and infuriating.”

“Don Siegelman was the most successful Democratic politician in post-Wallace Alabama. His new book tells an amazing odyssey involving two federal prosecutions and a conviction forced by a corrupt judge. Following explosive disclosures of political manipulation by Republican whistleblowers, the constant that links the many strands of the governor’s political assassination is Karl Rove.”

“Of the thousands of prosecutorial misconduct cases I have lectured on and written about, the government’s bad faith described in Stealing Our Democracy stands out starkly and may be without parallel. The book is a continuum of government misconduct which leaves the reader shaking in disbelief. The injustice described in Licensed To Lie pales in comparison to the corruption of justice, misconduct, and bad faith revealed in Stealing Our Democracy.”

“If you doubt that politics are the mortal enemy of justice, read Stealing Our Democracy. Terrible things happen when prosecutors forget that they are duty-bound to prosecute cases based solely on evidence and the law. Former Alabama Governor Don Siegelman’s book is a sobering reminder of the vast powers the federal government has wrongfully used as a sledgehammer to achieve a conviction at any cost.through the most tumultuous decade of social change since the Civil War. Terrible things happen when you mix politics and prosecutions.”

“Stealing Our Democracy shows the abuse of political power by Republicans began well before Donald Trump. As a popular Democratic Governor of Alabama, Don Siegelman posed a potent threat to the GOP’s Southern Strategy because Siegelman was a man the Republicans couldn’t defeat in an honest election. Karl Rove’s fingerprints are everywhere on the sleazy machinations that transformed a rising star in the Democratic Party—seemingly destined for the national stage—into a political prisoner whose biggest crime was winning elections in a red state.”

“Reading Stealing Our Democracy will make you cry — and then cry out for integrity in our justice system. Governor Siegelman was a victim of blatant abuse of power and the greed for power by rogue Republicans with ties to Karl Rove and the Bush White House. This book is a call to action.”

“Every law enforcement professional should be alarmed by the political assassination of Governor Don Siegelman told in this story. And every American who believes in democracy should read his book..”